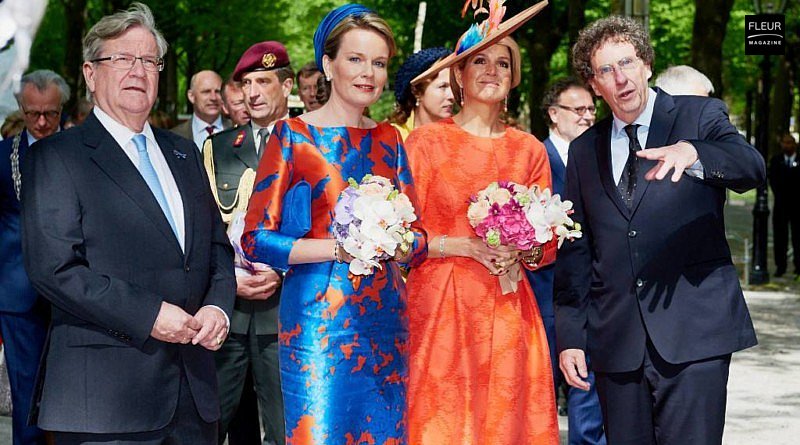 Her Majesty Queen Maxima and Her Majesty Queen Mathilde of Belgium opened the annual sculpture exhibition at Lange Voorhout in The Hague. The official opening of the exhibition “Flemish Vormidable Contemporary Sculpture’ happened with great interest from attendees, public and press.
This exhibition of museum Sculptures by the Sea, with the work of established and young emergingBelgian artists, celebrates 20 years of cultural cooperation between the Netherlands and Belgium. LM Flower Fashion was asked to style the ‘royal’ bouquets for the queens.

To celebrate 20 years of cultural cooperation between the Netherlands and Belgiums and the opening of the sculpture exhibition Vormidable Contemporary Sculpture, LM Flower Fashion was asked to style the royal bouquets for two queens. Queen Maxima and Queen Mathilde are known for their fashionable taste and therefore colorful flowers were selected. For Queen Maxima of the Netherlands was a hand styled bouquet of hydrangea Divine Cerise of Vollering Hydrangea, Pearl Avalanche of Meijer Roses, Phalaenopsis Omega of Walter Grootscholten Orchids, Polianthus Sensation and Clematis Inspiration of Marginpar.

The two queens were both wearing a creation by Belgian fashion house Natan. The bouquets were offered in the Royal Theatre in The Hague. The royal afternoon ended with a reception in the Kloosterkerk. The entrance of the queens was equally colorful styled.