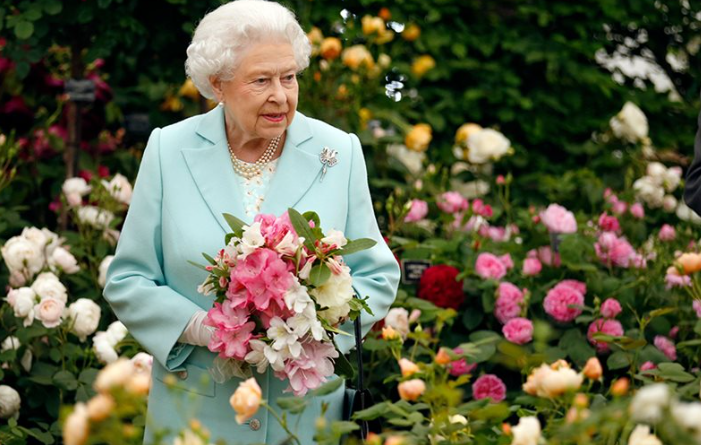 Queen Elizabeth II loved to be surrounded by flowers. From her bridal bouquet in 1947 to her death, they played a special role in the life of the British monarch.

Floral tributes at the palace

London florists are working overtime. The sea of flowers in front of Buckingham Palace, which is gradually assuming proportions similar to that following the death of Princess Diana, underlines once again the timeless role of flowers: there is no better way to express grief.

Flowers and Queen Elizabeth II were also inseparable at other important moments in her life.

At her wedding to the then Duke Philip on 20 November 1947 – the first televised ceremony to be broadcast worldwide – Princess Elizabeth carried a highly personalised bridal bouquet that revealed much about the Queen’s personal preferences. For example, three special varieties of orchid were used, a very delicate and rare flower at the time, symbolising love, beauty and strength. These varieties were white cattleya, odontoglossum and cypripedium, a reference to British colonies overseas. These were combined with wonderfully fragrant lily of the valley and the white flowers of the myrtle (Hypocalymma angustifolium) in reference to Australia, of which she was also head of state, and to the bridal bouquet of that other long-serving monarch, Queen Victoria.

However, Elizabeth’s bouquet disappeared after the wedding ceremony, so no professional photos of Princess Elizabeth exist with the flowers in her hand. Anew photo shoot had to be organised several days later with a replica of the bridal bouquet (see photo above).

On the death of her husband, Prince Philip, in March 2022, orchids were used to decorate the church in reference to their bridal bouquet. The chances are that this will happen again at the Queen’s farewell ceremony.

Queen Elizabeth II was also a welcome guest at the RHS Chelsea Flower Show, where she visibly enjoyed the floral displays.

The RHS Chelsea Flower Show organisers said they were “deeply saddened” by her death. “The Queen regularly accompanied her parents to the RHS Chelsea Flower Show and visited the show more than 50 times during her reign. She always enjoyed looking at the gardens and speaking to the exhibitors. We are therefore extremely grateful and proud that she was our ambassador.”

In May, during one of her last public appearances, another floral portrait was unveiled to mark the Queen’s Platinum Jubilee (70 years) (pictured below) with her favourite flower: lily of the valley. This flower symbolises motherhood, purity and happiness, and in the language of flowers, gentleness and humility.

In May, Queen Elizabeth II herself unveiled a painting at the Chelsea Flower Show.

Moreover, lilies of the valley had a very sentimental meaning for the Queen. In addition to her bridal bouquet, they were also used in the Queen’s coronation bouquet in 1953. We would therefore not be surprised to find them in the gardens of Buckingham Palace.