On the occasion of the birthday of King Willem-Alexander, the Dutch embassy organized the King Reception on April 29, 2015 at the Parisian residence of the ambassador, His Excellency Ed Kronenburg and his wife Liliane Kronenburg. LM Flower Fashion took care of the floral decoration.

h the UN climate conference COP21 prominently on the Paris Agenda, the King’s Reception this year was dedicated to sustainability. More than 500 guests were welcomed, in addition to regular contacts with a broad network of environmentally conscious entrepreneurs to green designers. As guest of honor at the reception endorses the French Minister for European Affairs, Harlem Désir, the importance of the Dutch-French cooperation in this field.

But sustainability was not the only order of the day. This year, starting one of the most prominent French sporting events, the Tour de France for the sixth time in history in the Netherlands. This celebration of the shared passion for cycling is also the kickoff for Dutch-French economic year. Also on the cultural level, 2015 is a special year. It is the year of the celebration of 125 years of Van Gogh, Dutch painter whose work is inextricably linked to France.

The guest of honor at the reception, French Secretary of State Harlem Désir, was looking forward to spring 2016 when Netherlands assumes the Presidency of the European Union. The Presidency and the run-up to it provide a framework for further strengthening of relations in the European context.

The flowers were standing beside the official royal guard. The entrance and the library, where the reception took place, was styled in orange tones. To complement the national tricolor (red,white and blue) through the rooms, the salon was decorated in blue tones, the beautiful music room was festively decorated in white shades and the dining room with a royal styled buffet in red tones. Flowers of other Dutch breeders were combined with the flowers of the LM Flower Fashion growers. Cymbidiums of HvS Orchids, gerberas by LG Flowers (Choicy Gerbera), Wigchert Delphiniums, Evanty anthuriums, De Haas Callas, Amaryllis of van den Ende, lilies by Lilies of Life, tulips of Arjan Smit Spierdijk and Hobaho Lisse and Mulder Asparagus were decorated with floral foam of Chrysal and in glassware Hakbijl Glass. Buxus of breeder Topbuxus and Mandevilla, Rosa, Hedera and Hibiscus by Vireo Plants were planted outside in the unique Parisian garden.

As grower Anco pure Vanda, Steef van Adrichem, described: “Dutch flower growers can be proud of the work of LM Flower Fashion on this high-quality opportunity to promote Dutch products!” 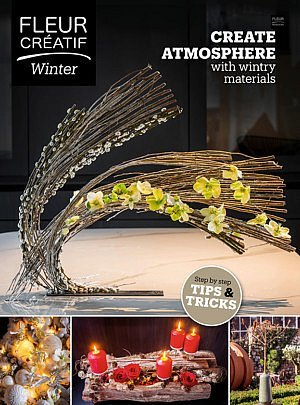