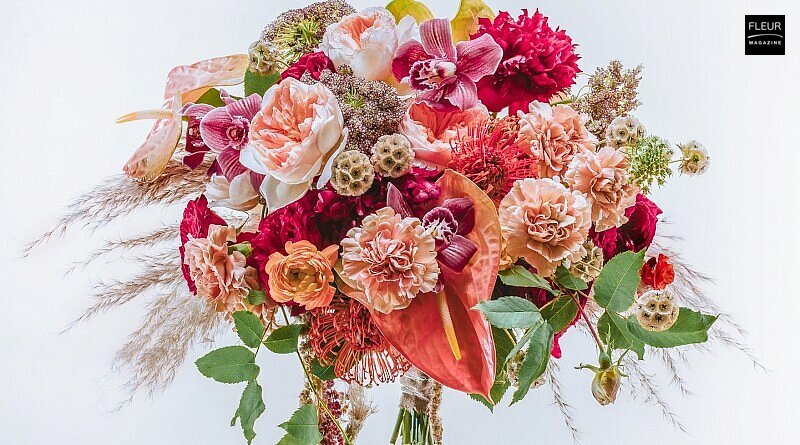 Bridal bouquets, how to make them special? Hitomi Gilliam, one of the world’s best floral designers, promotes a trend she calls ‘tropical nouveau’. In this trend, it’s all about pairing tropical flowers and garden roses.

When Hitomi Gilliam first began promoting the floral design trend she calls tropical nouveau, she really had not only tropical flowers but garden roses at top of mind.

“Brides would come to Hawaii for their destination weddings and insist on getting all their flowers shipped from the mainland, including garden roses,” she remembers. “I wanted to show them how they could have what they wanted and also include some local color.”

Indeed, color is the key! “People used to think that tropicals came only in red and green,” said Hitomi. “They don’t know about the pinks and peaches, the creamy whites and the pale greens.”

For wedding flowers that include tropicals in that soft, romantic color scheme, Hitomi’s first thought was to pair them with garden roses. “They are perfect for that, precisely because they are the total opposite of tropicals,” she explains.

Put the soft, ruffled texture of garden roses next to the smooth surface of an anthurium or a broad-leaved tropical foliage, and the texture of the rose comes to the fore. “It really plays up the garden rose,” says Hitomi. “The tropicals become like a supporting court. And you always want the garden rose to be the queen.”

? Combine Juliet roses with either of Hitomi’s two favorite peach-colored anthuriums. Toyama Peach is an obake anthurium in a soft peach, often with a greenish edge. Cognac, a Dutch-bred anthurium, combines peach and green with brownish, muddy tones. Perfect for color-blending with garden roses like Quicksand, Caramel Antike, or Golden Mustard.

? Don’t want to use glossy anthuriums? Many tulip anthuriums (Anthurium amnicola) offer a matt surface. Tropic Lime is one example, with a light green tint that absorbs rather than reflecting light. The cup-shaped bract can be used to cradle a garden rose, almost like extravagant, light green foliage.

? Or combine a light pink garden rose, for example the Princess Hitomi, with variegated leaves. “The colors in those leaves can go from the most brilliant green to the most subtle pink,” says Hitomi. “It just sings, because of the mix.”

Whether or not the wedding takes place in Hawaii or another tropical destination, for the adventurous bride, tropical flowers can make garden roses stand out in all their splendor. “The big message is about respect for royalty,” says Hitomi. “If you are using garden roses, the other flowers should complement, not compete.”