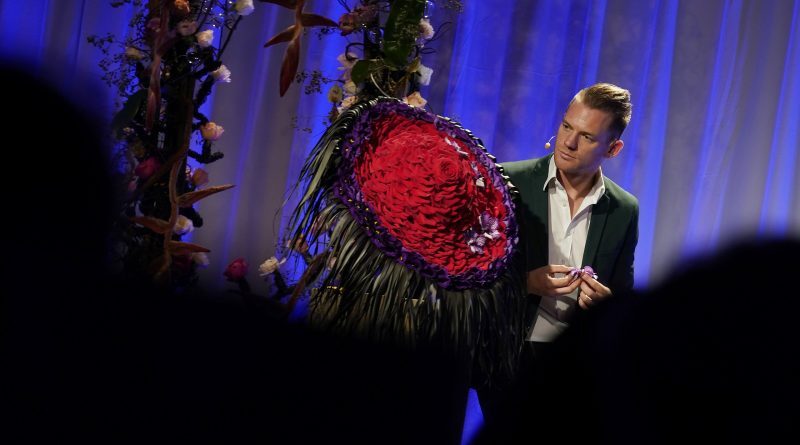 Who will be the European champion in floral styling? From 26 to 28 August, 16 floral designers in Poland will compete for the coveted title. ‘Winning would be like a dream,’ says Belgian champion Stefan Van Berlo. The United Kingdom will be represented by Caroline Crabb.

Every four years, the crème de la crème of European floral artists gather for the European Championships. This edition has been postponed for two years due to the pandemic. The enthusiasm is therefore particularly great among the candidates. Belgium is represented by Stefan Van Berlo.

‘When you have the chance to participate in the European Championship, you hope to do well. I’m going to do my best and hopefully that will pay off in a good result. I’m hoping for a spot in the top 5… I’d be really happy with a spot in the top 3. Winning would be a dream.’

As far as we are concerned, this is false modesty. Van Berlo has created many beautiful designs these last years that have also received the necessary attention in the media.

In the Footsteps of Sören Van Laer

It’s anyone’s guess who will be the biggest contender to succeed Tamás Mezőffy. The Hungarian took the last European title in 2016, ahead of Roman Steinhauer (Russia) and Pirjo Koppi (Finland). Belgium finished in ninth place with the young Sören Van Laer.

The European Championship is often a springboard for the candidates and their careers. Sören Van Laer became a much sought-after international floral artist, and the Hungarian winner took bronze at the World Championships three years later. He has learned a lot since the last competition. Stefan Van Berlo has been at the top of the flower world for years.

Last year he recaptured the Belgian title, ten years after his first victory.

Who is the big favourite now? Van Berlo shrugs his shoulders. ‘I’m not familiar with every candidate… So that’s a hard question to answer, but the favourites are Romania (with Nicu Bocancea), the Netherlands (with Hanneke Frankema), Hungary (with Gábor Nagy) and Germany (with Michael Liebrich). And my chances..? 1 in 16’, laughs Van Berlo.

In our opinion, Stefan Van Berlo and Hanneke Frankema are real contenders for the European title, although the competition will be fierce. For example, the Hungarian Gábor Nagy won the European Championship for young floral artists in 2017, at Eurofleurs in Sint-Truiden. The Romanian Nicu Bocancea will design the large floral arrangements at FLEURAMOUR in September.

We wish all the candidates the best of luck!

This time, the European Cup will be inspired by music. Until now, floristry was judged on sight, smell and a sense of touch. During the six final assignments, the florists are given the opportunity to refer to their musical preferences and to underline their cultural individuality.

‘Every candidate is going for the win and will give their very best…’, knows Stefan Van Berlo who is extremely looking forward to this special meeting place. ‘I hope to also be able to make some good contacts for the future.’