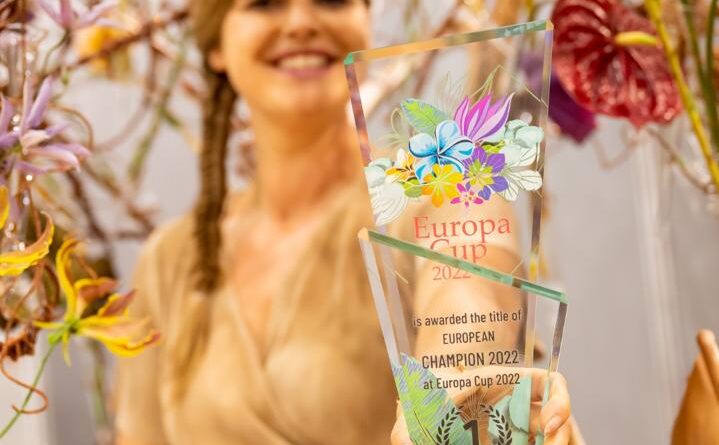 Hanneke Frankema from The Netherlands is overjoyed with her European floral styling title. She can call herself the best floral artist in Europe for the next four years. FLEUR spoke to her when she returned home, still in a blissful daze. ‘I immediately made my mark with the first assignment. That was fortunate, because I was really nervous. I didn’t like the final. Fortunately, the jury thought it was good.’ As we speak, surprisingly she is not going to the World Cup in her own country. ‘I don’t see that happening. Again, that stress. No thanks! I am European champion. My life has succeeded. I can die happy now’, she says with great humor.

We must be the 500th person to congratulate you. Having said that, has the King called you yet?

Hanneke Frankema: (smiles) ‘No, not yet. That may come soon. But my phone has blown up today. I can’t keep track of the number of phone calls and messages. Just answering all those lovely messages keeps me busy all day.’

You’ve made some fantastic creations. Did everything go according to plan?

‘No! The preparation was very intense. Everything worked out the way I wanted, but there are always small things that you would have preferred to have done differently in hindsight. Arrange a flower more to the left or to the right. Leave a piece of OASIS floral foam more visible. But we were under terrible time pressure. Everything was very tightly planned. That made it all very exciting. I had a good feeling with every assignment.’

After the first assignment – the table decoration – friend and foe agreed that you were the candidate to watch. It was a royal, majestic work.

(She is surprised) ‘Well, that all sounds good. Thank you! That’s where I immediately set the tone. I think so, yes. That’s when they could tell I was a real contender. I am also very proud of the result, because I put so much of myself into the creation. I work a lot with ironwork, so much so that they call me the “Iron Lady”. I had made special forging work for the European Championships: rose gold stylised acanthus leaves, made out of real copper. I just love Art Nouveau. All the round lines were in it. The colours of the flowers and the materials also fit very well in the arrangement. The whole radiates tranquillity, and it reflects my favourite colours, so that was an easy choice to make.”

“We also had to choose a corresponding song from our own country, which matched the theme of music. I thought “Teach Me How To Dance With You” by Causes was a good fit. It is an older Dutch song, but I love it. I am so happy that that table decoration worked so well. You were allowed to have all of your flowers delivered for all the assignments, fortunately I had a whole laundry list of sponsors, but for this test you had to order them on the spot via a web shop. You can prepare everything in advance down to the last detail, but that uncertainty caused extra stress, but I immediately got into a good flow and I was able to control those nerves.’

In the second assignment – ‘Dancing in the Rain’ – you continued your momentum. You made a big, sparkling raindrop. We immediately saw the signature style of Hanneke Frankema.

‘That was my great asset, I think. People noticed my very own style in every floral arrangement. That’s kind of my trademark. That big drop had to consist of 50 percent OASIS floral foam, but I adapted it to my own vision. Among other things, by giving it the same detailed touches as the ones I gave to the table decoration. Certain aspects of my table piece were reflected in the other assignments. A common thread, so to speak.’

And then there was the body decoration. Very stylish.

‘I’m very proud of that piece. Do you know that my aunt worked on the corset? And that the Friday before the European Championships I went to five growers in the Netherlands to look in special greenhouses for suitable botanical materials? There I was able to pick up some exclusive Anthurium with a 30-centimetre spadix and have them quickly transferred to Poland. The corset is also made from the roots of the Davallia fern. The flowers had to be meticulously arranged in the opening.’

You were able to check out everyone’s work. Who seemed to be your biggest competitors during the preliminary round?

‘Gabór Nagy of Hungary – who finished second – was one of my top contenders and I also rated Nicu Bocancea of Romania high (he finished fourth). I had not put Germany’s candidate, Michael Liebrich, among the big favourites during the assignments, but he turned out to have scored a good average on all assignments. And yes, I also expected the Belgian participant Stefan Van Berlo to be right at the top.’

Only the top six of the 16 candidates were allowed to go to the final. Did you feel comfortable?

‘Not at all! Apparently, I scored very well on both final tests, but I didn’t like it. It wasn’t my thing at all. There wasn’t even wire work. Technically and in terms of design, I did those tests well, but I actually didn’t like the final. What I made was not my taste at all. I would never make this myself. But apparently the jury thought it was very good. That was good for me, because in terms of points we were all very close to each other. On the one hand, you want to win with a big lead, but I’ll take whatever. Winning with a small difference also has its charm.’

Do you think that new doors will open for you because of this European Championship title?

‘I already do a lot of big shows, so I don’t think there will suddenly be a lot of changes. Of course, everything flows from this. The European Championship has been on my wish list for a while now. I am 39 years old but I started competing in my early twenties. Becoming European champion, that’s great, for me, for my team and for my sponsors. And I think my two daughters are going to brag about their mum on their first day of school today! (laughs).’

‘My daughters are going to brag about their mum on their first day of school. —               European floral styling champion Hanneke Frankema

And now the world title?

“No, I don’t think so. The World Cup floral styling is going to be held in the Netherlands in 2025, but the registrations for the preliminary rounds are already closed.”

Surely the Netherlands has to send their best floral artists and the winner of the European Championship to the World Cup? You have to find a way to compete, right?

“I don’t see that happening. There’s just too little time between the European Championship and the national preliminary rounds of the World Cup. To start preparing for another big tournament so soon after this one, I don’t think so. The European Championship was very stressful, it is hard work and finding sponsors is a big challenge. I also have a family, which is very important to me. You have to look at it this way: no European champion has ever become world champion. The likelihood of winning is so terribly small. So many things can go wrong at the World Cup, things that you can’t control. I prefer to go out on top. If you don’t live up to people’s expectations there, it can feel like a failure. No, I am European champion. That is enough. My life has succeeded. (Laughs) I can die happy now.”

“More stress for the World Cup? I don’t think so; I prefer to go out on top. So many things can go wrong at the World Cup.” —  Hanneke Frankema

Are you going to look at your gold medal every day now?

“That’s not going to be possible. I did not receive a gold medal, but I did receive a trophy and a cash prize (2,000 euros), and a refrigerator! (laughs loudly) I had to double-check that I heard it right! It will be quite a job to have it delivered from Poland, but anyway, I won it. Although I do think it’s a funny prize.”

“FLEURAMOUR remains one of my most beautiful floral creations”

If you follow the social media of FLEUR CREATIF or FLEURAMOUR this summer, you will have seen Hanneke Frankema’s fabulous floral design of the FLEURAMOUR edition of 2016. “It is still one of my most beautiful works and certainly one of the largest,” Hanneke thinks back with pleasure to that gigantic construction of a 10-metre diameter, 8 metres high and weighing 1,300 kilograms that she made together with Max Van de Sluis, also her team partner at the European Championships in Poland.

Hanneke Frankema will not exhibit at the 25th edition of FLEURAMOUR, from 23 to 26 September. Her Romanian challenger, Nicu Bocancea, who finished fourth, will. He follows in her footsteps as the creator of the great floral realisation on the forecourt of the Grand Commandery in Alden Biesen in Belgium.